R Kelly’s estranged daughter has described the singer as a “monster” and says she “prays for all the families affected” following a documentary detailing abuse allegations.

In a lengthy message on her Instagram Stories, Buku Abi, real name Joann Kelly, said “devastated is an understatement” of how she has been left feeling by the accusations made in the Surviving R Kelly programme.

Kelly has not been charged with any offence in relation to the claims, and denies any wrongdoing

In her statement, Buku said she and her siblings and mother had not spoken to her father in years and that she had “no relationship” with him.

“To the people that feel I should be speaking up against everything that is going on right now. I just want you all to understand that devastated is an understatement for all that I feel currently,” she said.

“I pray for all the families & woman (sic) who have been affected… Trust, I have been deeply affected by all of this. However, it has been very difficult to process it all. Let alone gather all the right words to express everything I feel.”

Buku went on to say: “The same monster you are all confronting me about is my father. I am well aware of who and what he is. I grew up in that house.”

She said it had taken her nearly three days to write the statement and that it was a “very difficult subject for me to speak on”.

Her post finished with a thank you to those who have supported her, saying: “This past year for my family has been very difficult, all the love and support you all continue to show is why we keep going. You all fuel us.”

Surviving R Kelly details allegations that have followed the singer throughout his career.

In her statement, she apologised for her “poor judgement” and for not speaking out sooner, and said the collaboration had been made at a “dark time” in her life.

She has promised to remove the track from streaming services. 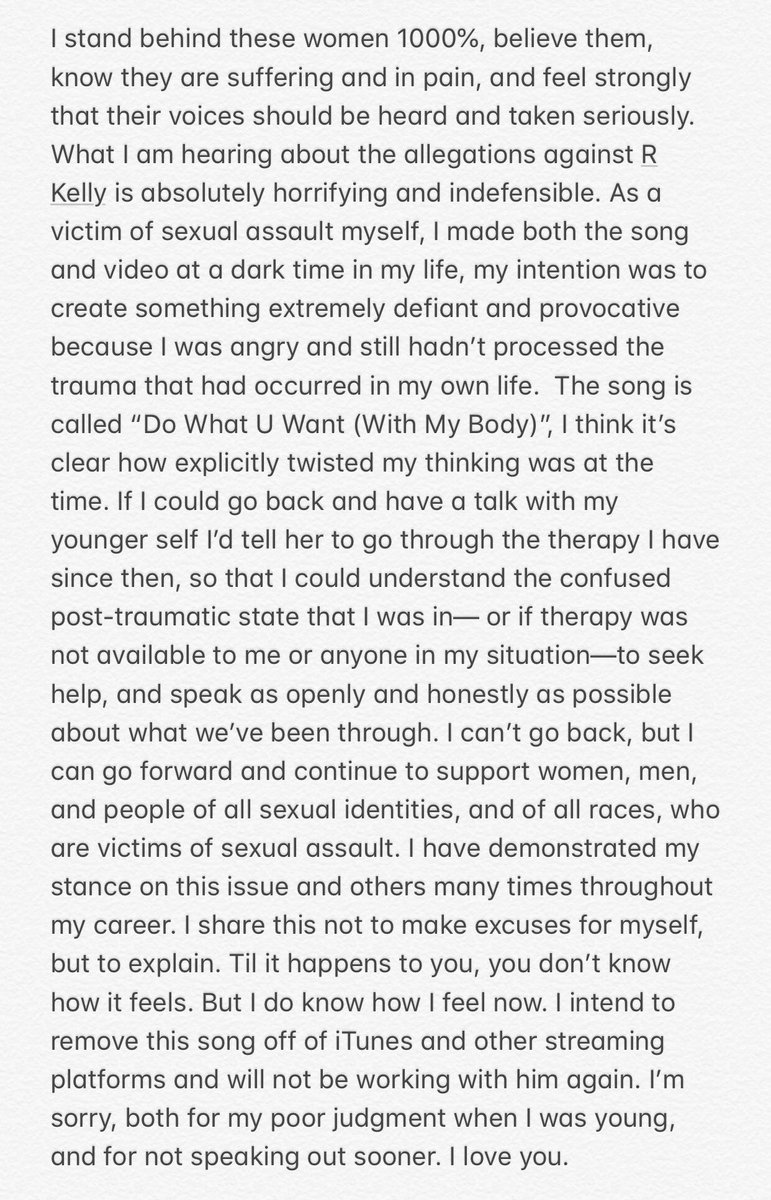 Streaming numbers for Kelly’s music are said to have almost doubled since the first episode aired.

The singer’s songs streamed 870,316 times on 2 January, the day before it went out. Sales tracker Nielsen Music said he had garnered nearly 1.73 million streams following the sixth episode on 6 January.

In 2008, a jury acquitted the singer of child pornography charges. Prosecutors argued a video depicted sex acts between him and a 13-year-old girl, but both Kelly and his alleged victim denied it was them in the film.